BOISE, Idaho — Respect for Resources is one of the J.R. Simplot Company’s Core Values. In that spirit, maximizing energy efficiency was a key goal when the Company completed its 400,000 square foot expansion of its potato processing facility in Portage la Prairie, Manitoba, Canada. This expansion further solidified Simplot’s footprint in Canada and the Midwest and allowed them to diversify distribution channels to eastern North America and beyond. It also more than doubled the facility’s processing capacity.

To incorporate energy efficiency improvements into the design and operations at Portage, Simplot partnered with Efficiency Manitoba, an organization dedicated to helping all Manitobans enjoy the benefits of saving energy. The collaboration delivered significant energy and bill savings and established the Portage plant as one of the most energy-efficient facilities of its kind in the world.

Simplot’s facility expansion included designing and implementing several energy efficiency enhancements, maximizing the energy efficiency of its production and operations, as well as constructing a more energy-efficient building itself. 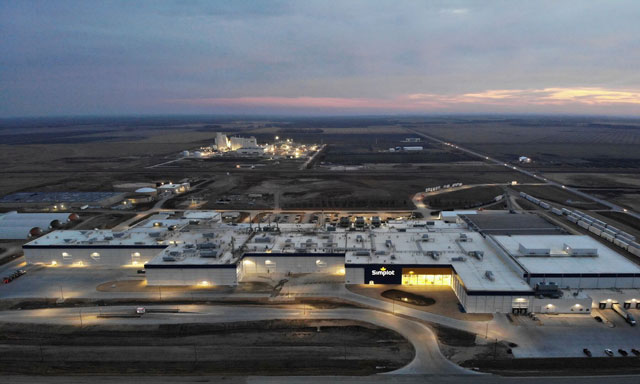 Simplot and Efficiency Manitoba partnered on multiple processing-related energy efficiency opportunities. The most significant electricity-saving upgrades included installing variable speed drives on 12 fans and 37 pumps, yielding over 9 gigawatt-hours (GWh) of annual electricity savings, with another 8.8 GWh of savings derived from more energy-efficient refrigeration systems. The installation of a heat recovery system, consisting of a series of heat exchanges which removes heat from the fryer exhaust to preheat process hot water and incoming fresh air through the building’s HVAC system, produces over 34% of Simplot’s natural gas savings.

Other key energy-saving features of the expansion include improved HVAC, building envelope, and lighting systems. Through the support of Efficiency Manitoba’s New Buildings Program, Simplot’s final energy model confirmed their expansion exceeded the minimum energy efficiency requirements of the Manitoba Energy Code for Buildings by 14.5%. This reduces the building’s operating costs by $270,000 annually.

Natural gas savings are expected to provide annual greenhouse gas emission reductions of over 11,000 metric tons of carbon dioxide equivalent. So not only will Simplot realize impressive energy and bill savings, but the Company will also reduce their environmental impact and contribute to a greener, healthier Manitoba.

“We appreciate the incentives available for energy efficiency projects, and our partnership with Efficiency Manitoba,” said Simplot Energy Engineer Don Strickler. “These incentives and efficiency expertise enable us to justify projects that otherwise may not have been implemented. We are very proud of our efforts to continue to minimize our environmental footprint and optimize water and energy usage.”

“Simplot has been an outstanding corporate and community partner since establishing its operations in Manitoba,” said Manitoba Minister of Agriculture, Ralph Eichler. “This investment further cements their reputation as a pillar in Manitoba’s agriculture and food processing sector. The plant’s increase in capacity also presents a tremendous opportunity for Manitoba farmers to strengthen their partnership with a reliable local processor and increase potato production in Manitoba.”

Simplot’s Portage la Prairie potato processing facility is 50 miles west of Winnipeg in south-central Manitoba and provides access to the workforce, potatoes and growing capacity needed to meet the increased demands of the facility and the market.

Simplot began operations in Portage in 2003 and at the time the plant was designed to be expanded to match future market needs. The market demand, both domestically and internationally, necessitated that expansion of the facility from 180,000 to 460,000 square feet, more than doubling the Company’s need for potatoes from regional growers while increasing employment to more than 300.

Learn more about Simplot’s commitment to sustainability while contributing to feeding our world.